By Joanna Crawley For Mailonline

Holly Willoughby is back in her glam gowns for Dancing On ice.

The ITV star took to Instagram on Thursday to show off her gorgeous look from Wednesday night's press launch for the latest series of the hit show.

Holly looked stunning in a deep red gown with a daring plunging neckline. 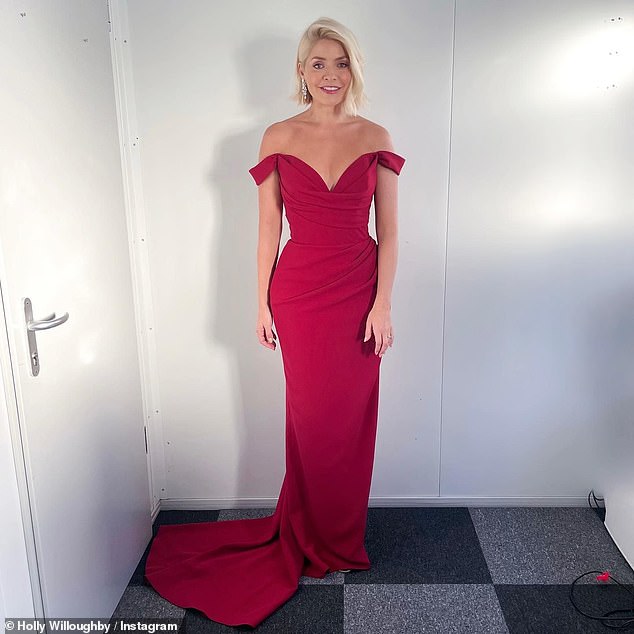 Stunning: Holly Willoughby is back in her glam gowns for Dancing On ice. The ITV star took to Instagram on Thursday to show off her gorgeous look from Wednesday night's press launch

The star wowed in the dress from Lihi Hod Bridal, which featured a daringly low sweetheart neckline and a thigh-high split, showing off her golden tan.

The figure-hugging dress flaunted her trim waist, while the glam star accessorised with glittering drop earrings and strappy gold heels.

She proudly showed off the look on Instagram, sharing a full length view of the outfit and a close-up of her stunning hair and makeup look. 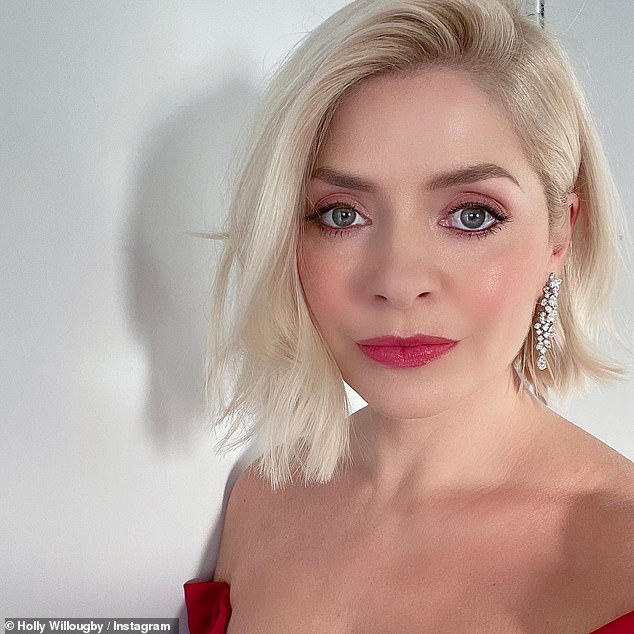 Ready for her close-up: She proudly showed off the look on Instagram, sharing a full length view of the outfit and a close-up of her stunning hair and makeup look

Dancing On Ice returns to TV screens on Sunday, with the show's hosts and judges uniting for a glam photocall launch at Elstree on Wednesday evening.

Joining Holly at the photocall was her co-presenter Phillip Schofield and new judge Oti Mabuse who has joined Christopher Dean, Jayne Torvill and Ashley Banjo on the new-look panel. 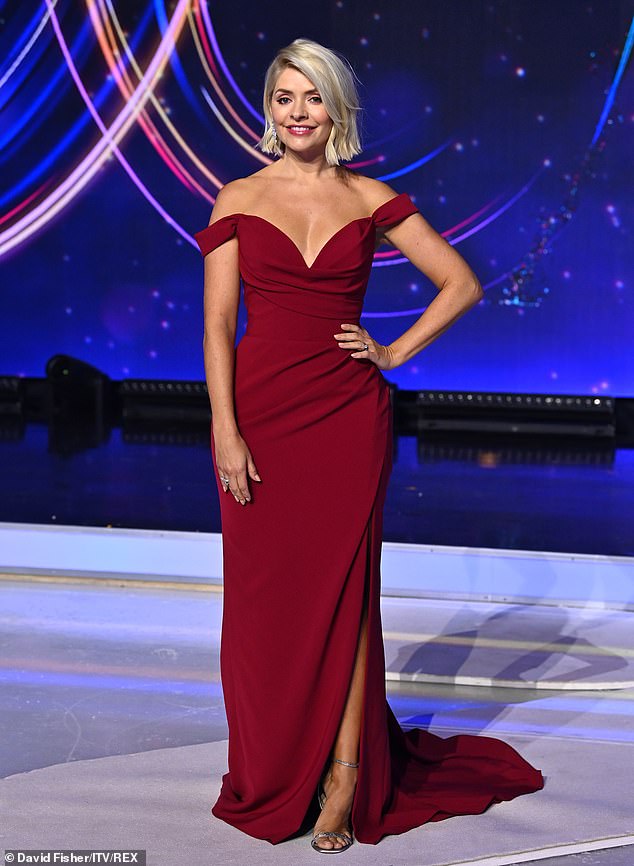 Dancing On Ice returns to TV screens on Sunday, with the show's hosts and judges uniting for a glam photocall launch on Wednesday evening 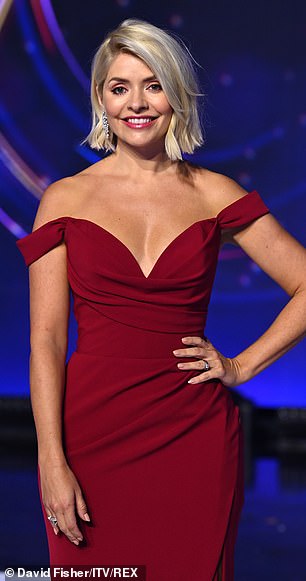 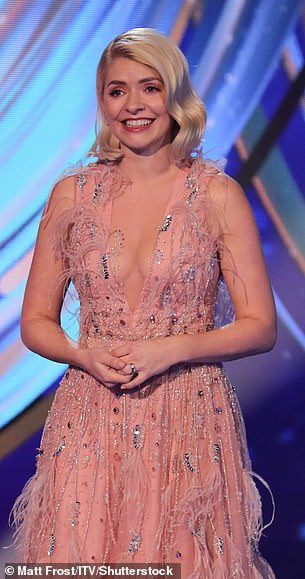 Back in the plunge: Holly led the stars, looking incredible in a racy off-the-shoulder gown. The star's 2021 launch show dress sparked 341 Ofcom complaints 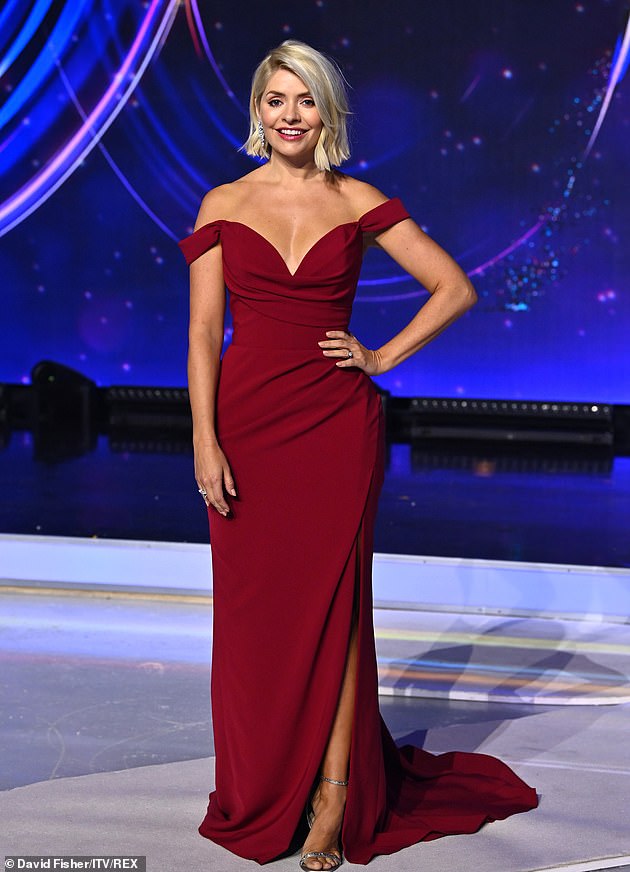 Lights, camera, action: Holly no doubt has a glam designer wardrobe lined up for this year's live shows

Make it a merlot like Holly Willoughby wearing Lihi Hod 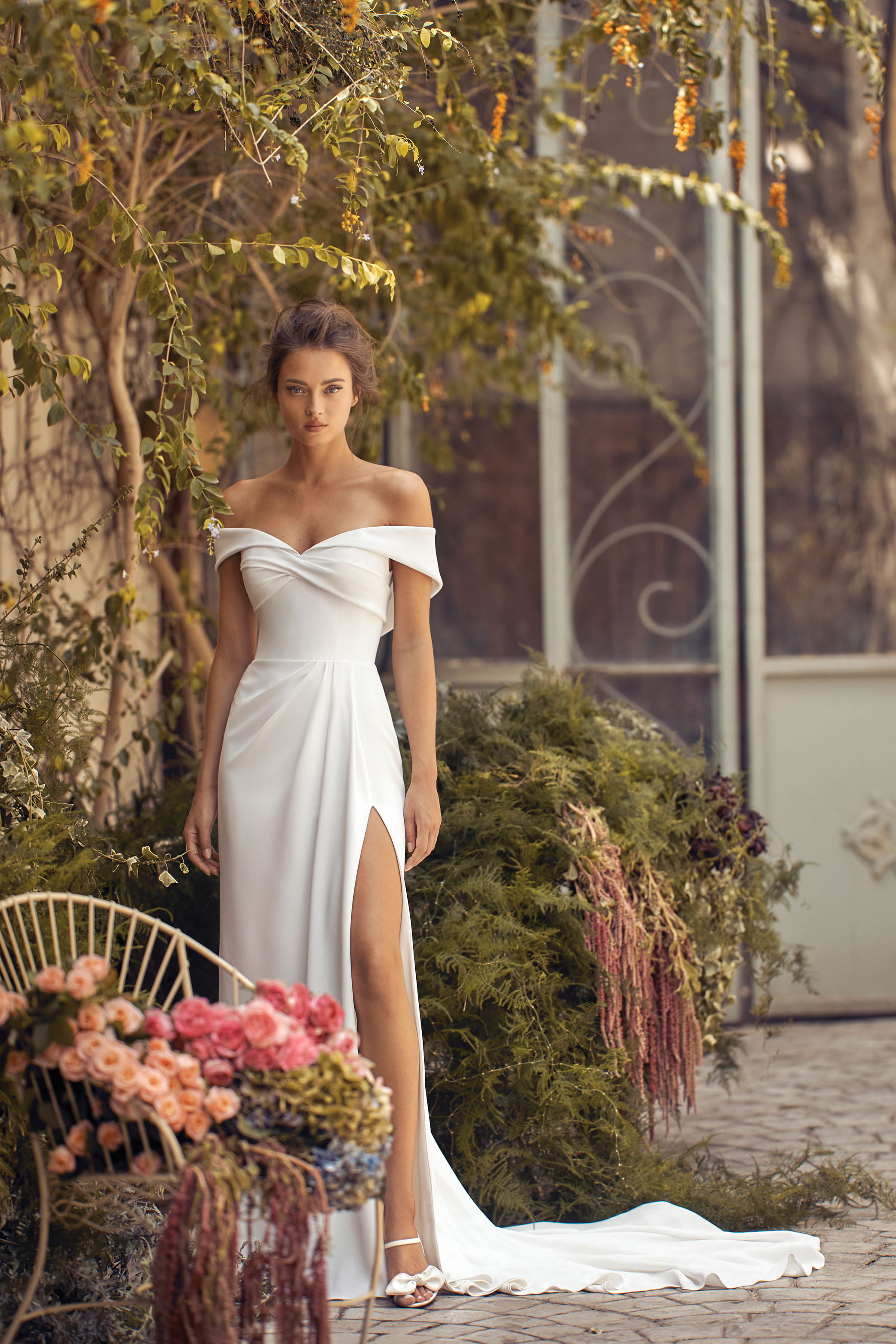 Who else is excited for the return of Dancing On Ice this weekend? Yep, us too!

Holly Willoughby gave us a sneak peek of things to come, and naturally the TV icon is looking glamorous as ever.

Holly worked autumnal style vibes in a svelte gown by bridal designer Lihi Hod, who custom designed the 'Paloma' gown in burgundy for her. Love those twinkling W.Salamoon & Sons jewels and Rene Caovilla heels, too.

Or, work burgundy hues with our pick of the best off the shoulder gowns from Chi Chi London, SHEIN, Jaded Rose and Solace London in the carousel.

MailOnline may earn commission on sales from these product links
...NOW GET ONE LIKE IT

In 2021 Holly's DOI wardrobe shocked viewers and led to over 300 Ofcom complaints. Her nude plunging gown from the launch episode kicked off the furore.

The £6,240 couture dress by Dany Atrache from his Fall/Winter 2020-2021 collection, sparked criticism for some viewers, with one tweeting at the time: 'Why does Holly wear that type of dress on a family show?'

Another said: 'Why doesn't Holly dress appropriately for being at an ice rink? What a totally inappropriate outfit!' 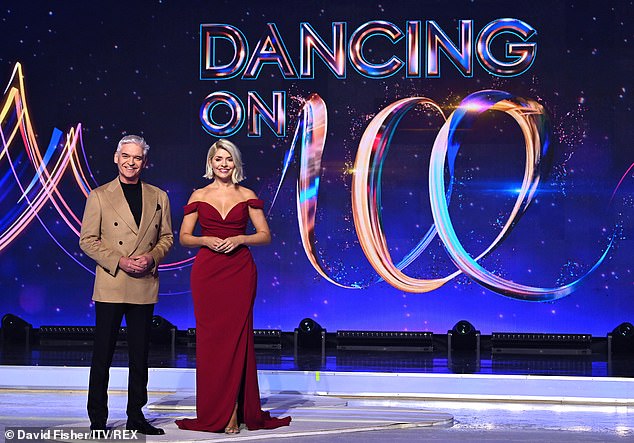 They're back! Joining Holly at the photocall was her co-presenter Phillip Schofield

The Strictly dancer showed off her legs in the thigh-skimming number, while she also debuted a blonde-tinted new hairdo. 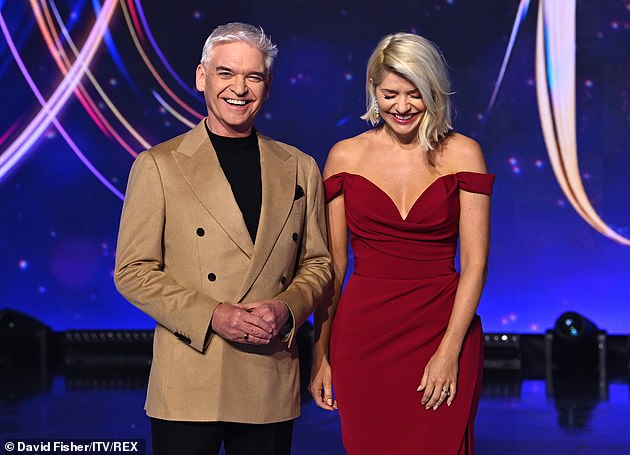 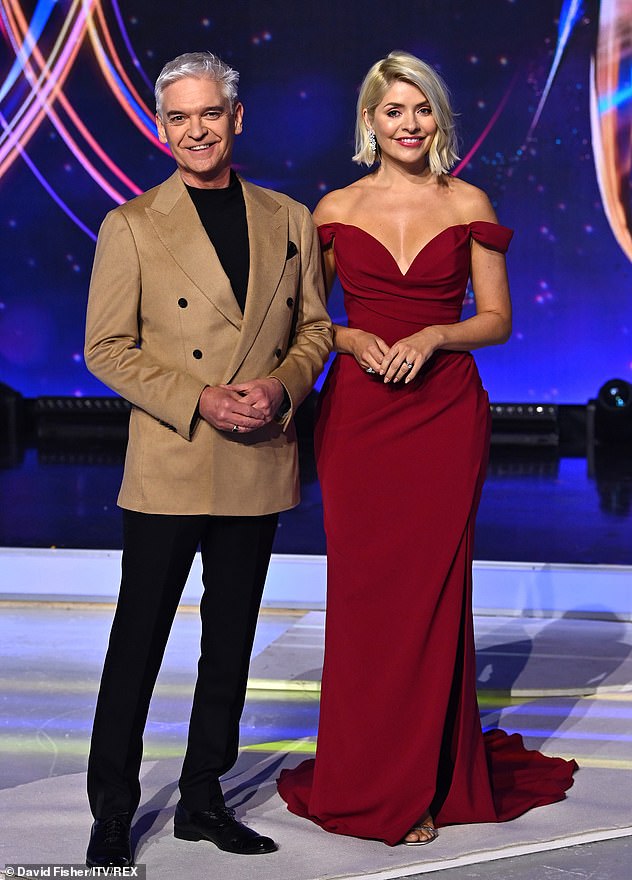 This year's celeb contestants will make their debut on the ice on the live launch show this Sunday, with ITV hoping there will be less injuries than last year's chaotic series.

In 2021 contestants were forced to form a 'bubble' with their partners due to Covid restrictions and it was filmed without a live audience. 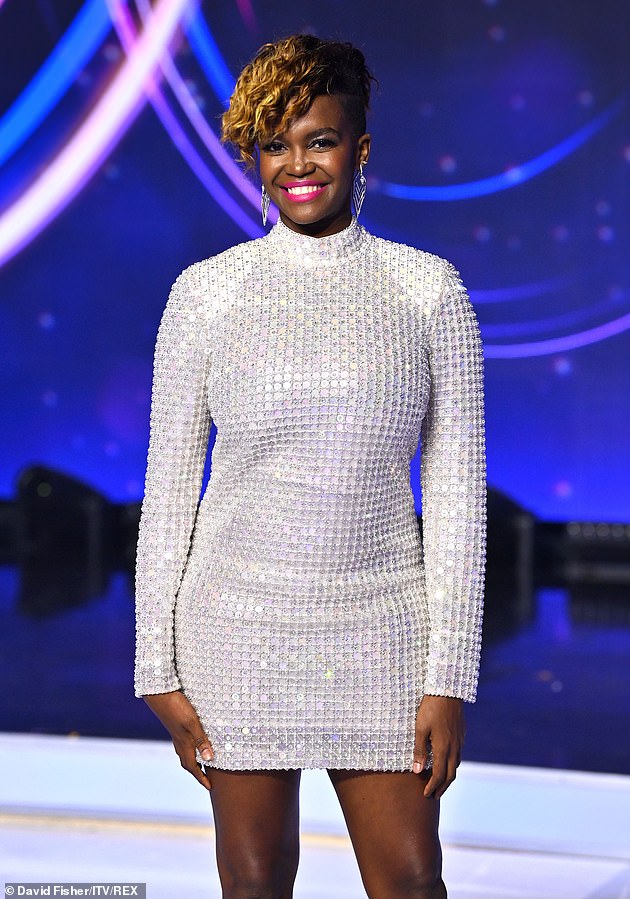 Looking fab: The Strictly dancer showed off her legs in the thigh-skimming number, while she also debuted a blonde-tinted new hairdo

Both reserve contestants had to be used for the first time in the show's history as three celebrities were forced to withdraw and two tested positive for the virus.

Denise, 47, sustained an injury in the second week after she suffered three bone fractures and a partially dislocated shoulder.

Billie, 31, became the second to withdraw from the competition as she sustained a head injury during training, while Australian actor Jason, 53, was also forced to leave due to a back injury, in week 6 of the show. 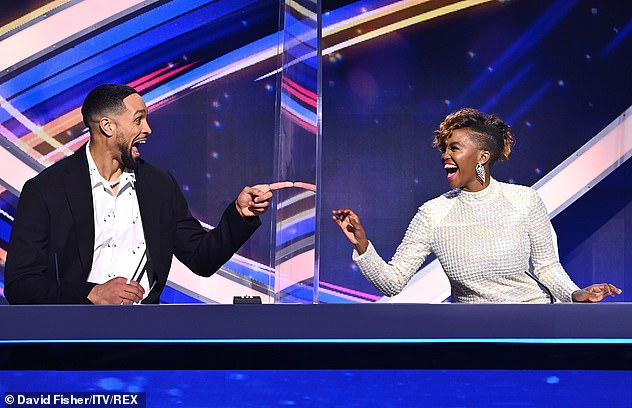 Making pals: Oti shared a fun moment with fellow judge Ashley Banjo as they took their seats on the judging panel, which featured covid-secure screens between the judges 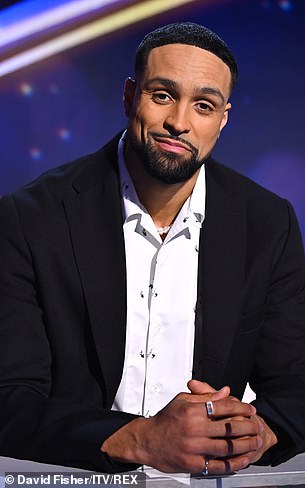 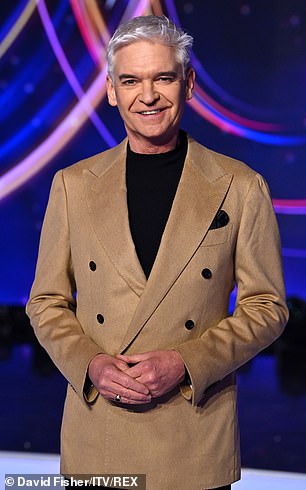 Suave: Ashley was sharp in a black blazer while host Phil chose a quirky double breasted tan jacket for the photocall

Veterans: Ice skating icons Jane Torvill and Christopher Dean make their return to the judging panel for the 2022 series

The series suffered another blow as comedian Rufus Hound, 42, Joe-Warren Plant, 19 and his professional partner Vanessa Bauer, 25, all contracted Covid-19.

Judges Jayne Torvill, 64, and Christopher Dean, 63, have revealed that the next batch of contestants are 'well established' and 'ready to go', following last years turmoil.

Chris detailed that the previous season fell victim to Covid protocols and rushed training before confirming that this year they would be more prepared. 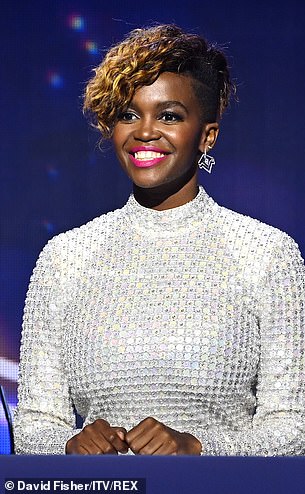 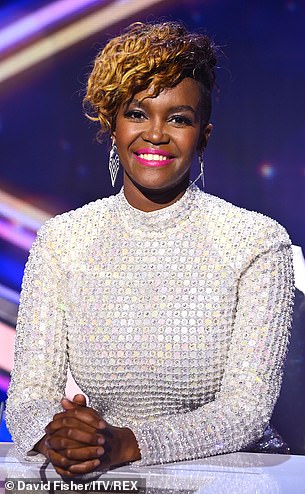 Sitting pretty: Oti looked excited to be taking her seat as a judge. The star hit fame thanks to her winning streak as a professional on Strictly Come Dancing 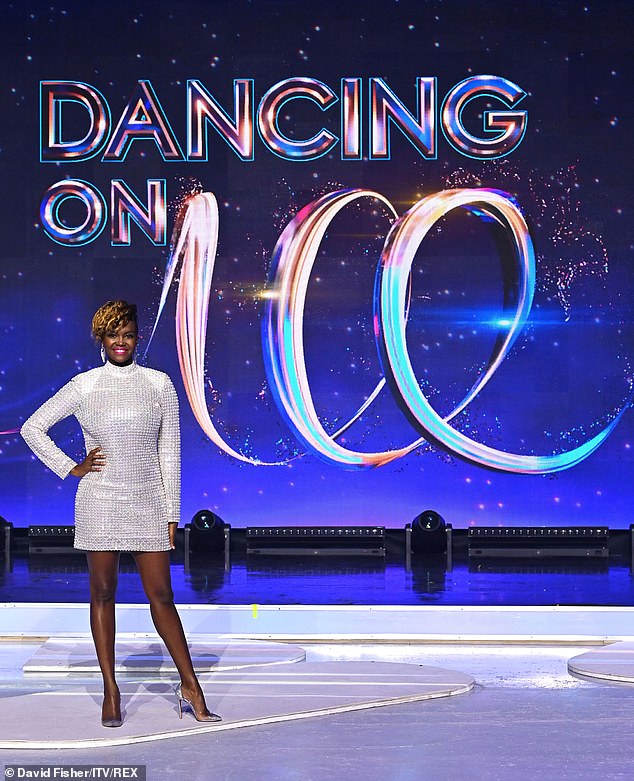 New face: Oti has replaced John Barrowman on the judging panel this year 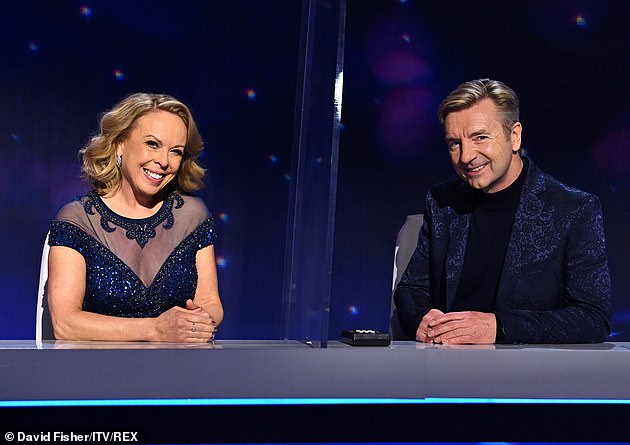 Experts: Torvill and Dean have been joint head judges on DOI since 2018. They acted as mentors for the contestants in previous series

He said: 'Last year practice got pushed - squeezed - whereas this year the celebrities have gone through the process of getting introduced to the ice longer.

The 2021 show was full of difficulties and was forced off the air at one point, causing Phil, 59, and Holly to turn to sipping on G&Ts in the final ad break of the series. 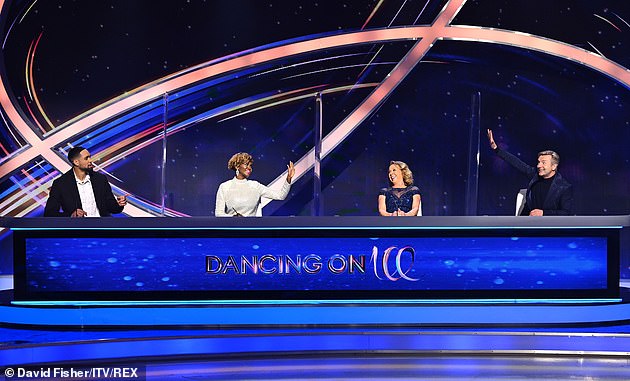 Not long now! Viewers will see the celeb skaters work to impress the judging panel when the show returns on Sunday, live from Elstree 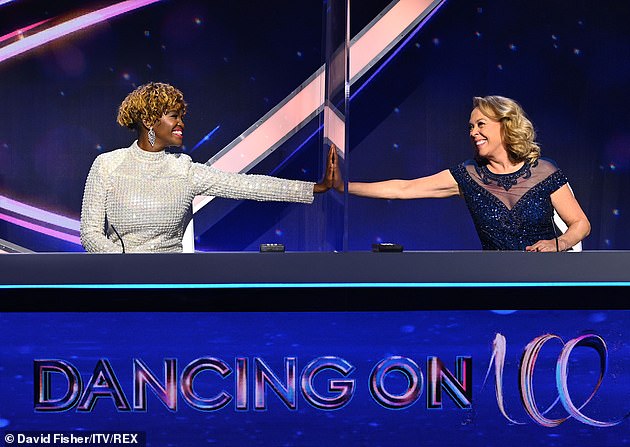 Nice to see you! Oti and Jane shared a moment on either side of their safety screens

Holly recently revealed: 'Last year because of Covid we weren’t allowed a wrap party so I snuck in two of my kids’ water bottles with their names on.'

She went on: 'Nobody could see what was inside, and I filled them up with gin and tonics, one for Phil and one for me, and in the last ad break before the end, I was like, "we can bring out the gin now."'

'We both sat there and had a gin and tonic. We don’t do this on every ad break but for the final there was no wrap party and after the last series we all needed it.'

The new series of Dancing on Ice starts this Sunday at 6.30pm on ITV.

TOP DISCOUNTS OF THE WEEK