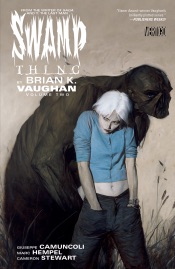 In this series from 2000, writer Brian K. Vaughan kicked off a new SWAMP THING series that starred Tefé Holland, daughter of Swamp Thing and Abigail Arcane. In this concluding volume, Tefé is on the run from government agents intent on wiping her out of existence, along with anyone she's come in contact with. But when Tefé helps a friend escape her father, a ruthless congressman bent on harming the environment, she runs headlong into radical environmentalists whose own plans are every bit as dangerous as the politician's. Plus: Tefé's father, the real Swamp Thing returns at last! But why has he chosen this moment to make his reappearance? Collects SWAMP THING (2000) #11-20.