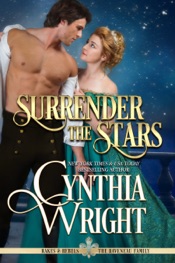 An outrageous masquerade fraught with peril and passion...

~ When renegade Irishman Ryan Coleraine is persuaded to accompany the adventurous Raveneau family to Regency London to spy for America during the War of 1812, he discovers that he must not only pretend to be their son… but also a fop! Meanwhile, Lindsay Raveneau, a lovely and independent bluestocking, finds herself with a "brother" who challenges and arouses her in the most unsettling ways...

Danger, intrigue, and forbidden desire mount as Ryan and Lindsay carry their daring masquerade to the elegant drawing rooms of Regency society. Adding to the tensions are Lindsay’s parents – André and Devon Raveneau from SILVER STORM – who must attempt to chaperone their daughter and her "brother" under their own roof!

SURRENDER THE STARS is pure delight – deliciously sensuous, humorous, and vibrant with the magic of love. Cynthia Wright has written another "keeper!"