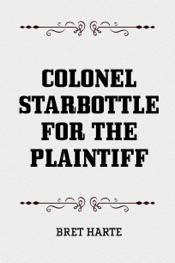 America has always had a fascination with the Wild West, and schoolchildren grow up learning about famous Westerners like Wyatt Earp, Buffalo Bill, Wild Bill Hicock, as well as the infamous shootout at O.K. Corral. Pioneering and cowboys and Indians have been just as popular in Hollywood, with Westerners helping turn John Wayne and Clint Eastwood into legends on the silver screen. HBO’s Deadwood, about the historical 19th century mining town on the frontier was popular last decade.

Not surprisingly, a lot has been written about the West, and one of the best known writers about the West in the 19th century was Francis Bret Harte (1836-1902), who wrote poetry and short stories during his literary career. Harte was on the West Coast by the 1860s, placing himself in perfect position to document and depict frontier life.